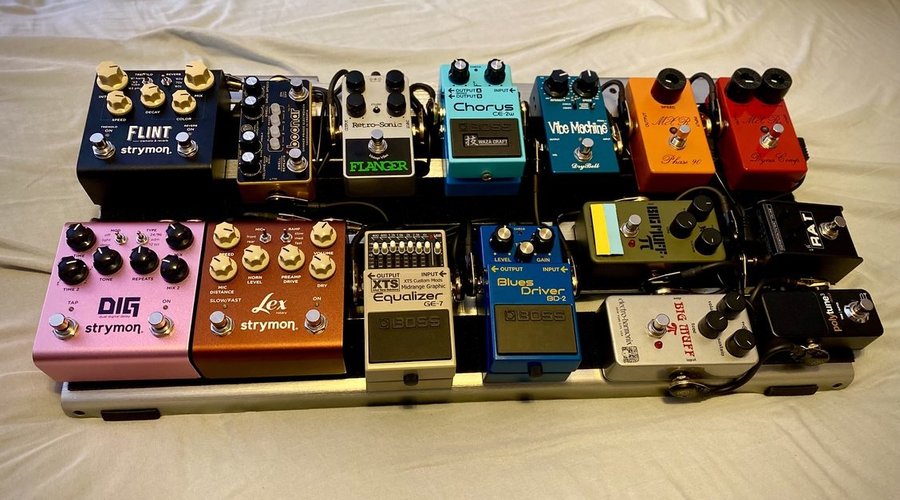 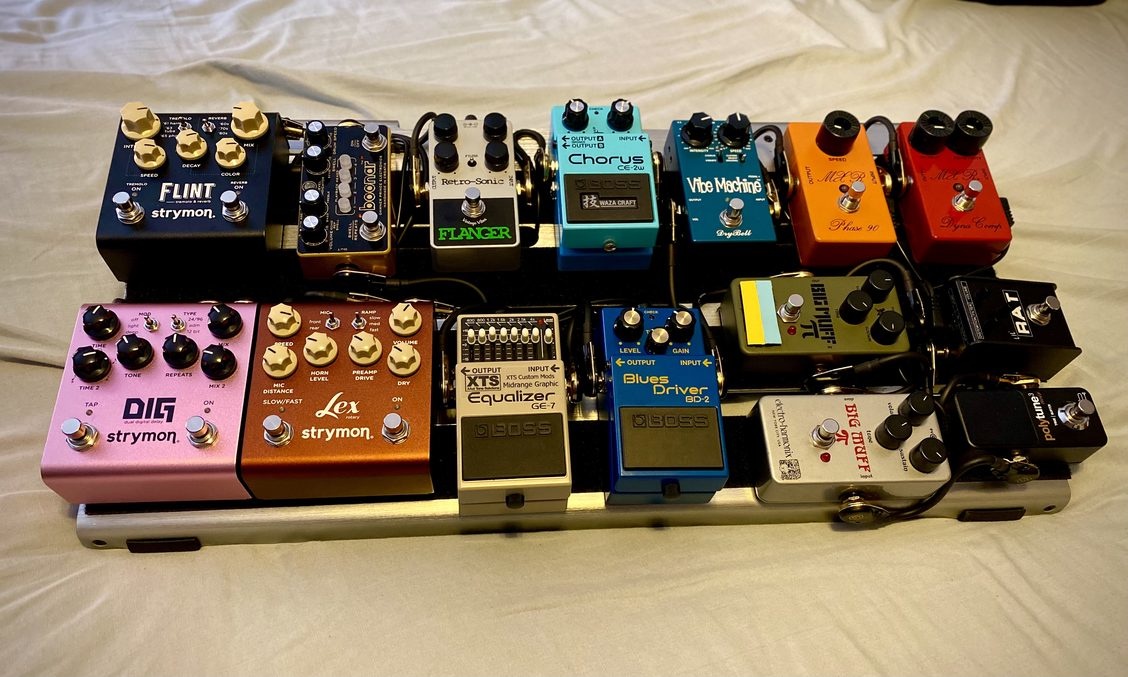 An Electro-Harmonix Big Muff might be the most essential David Gilmour pedal, especially for his tones from the late 1970s and on. The Ram’s Head, with its scooped mids, covers the ‘70s and is the Big Muff most associated with Gilmour. The Green Russian has more mids but less overall gain, and it covers the late ‘80s and the ‘90s Pulse era when he used the Sovtek Civil War Big Muff.

I also included a Pro Co Lil’ Rat, as he used one in his Pulse rig for some songs. (Pulse has my favorite Gilmour tones and playing, and this board reflects that!) I compared the Lil’ Rat to a vintage 1989 Rat we had in the store, and I surprisingly preferred the new one. It was much smoother with less gain.

Gilmour is known for using the Colorsound Power Boost and multiple Chandler Tube Drivers. A good alternative to both of these is a simple Boss Blues Driver. I compared the regular Blues Driver to the Waza Craft version and preferred the regular one because it has more crisp top end.

Compression is an essential effect for Gilmour clean tones. Over the years, he’s used MXR Dyna Comps, Boss compressors like the CS-2, and others. I love the simplicity and relative quietness of the Script Dyna Comp.

Gilmour has used Boss GE-7s to adjust the EQ of his drives, often having a GE-7 assigned to Big Muffs and other distortions. I like the XTS modded one, which quietens the pedal and focuses the EQ bands on a guitar’s midrange.

Gilmour loves modulation! He used an MXR Phase 90 on songs like “Shine On You Crazy Diamond” and “Have a Cigar.” I prefer the Script version because it is more subtle than the standard version.

He used a Uni-Vibe on Dark Side of the Moon, on tracks like “Breathe.” I love the DryBell Vibe Machine and have compared it to an original Uni-Vibe. Very, very close and way less hassle!

Gilmour is also known for using an Electro-Harmonix Electric Mistress flanger, starting towards the late ‘70s. The solos in live versions of “Comfortably Numb” sometimes had an Electric Mistress on them, for example. This style of flanger is essential to get over something like an MXR, and I love the Retro-Sonic Flanger.

Rotary is another modulation Gilmour used all throughout Pink Floyd. I like the Strymon Lex for rotary sounds on Dark Side of the Moon, especially for faster speeds. At slow speeds, the Lex covers the later period well too, though a pedal like the Dawner Prince Pulse or Boss RT-20 would be even more appropriate. The Lex is my preferred choice overall.

Finally, it is good (but not 100% necessary) to have tremolo on a Gilmour board. A prominent example is the fast tremolo in “Money,” but tremolo is probably the least needed modulation for Pink Floyd. The Strymon Flint is my favorite tremolo pedal available.

Delay is absolutely fundamental to any Gilmour-style playing. It’s on everything! I think of his delays over the years as being in two categories: earlier Binson Echorec delays and later digital delays.

The Dawner Prince Boonar is my favorite Echorec emulation. The Catalinbread Echorec is excellent as well, but I prefer the controls on the Boonar.

Gilmour preferred digital delays starting in the late ‘70s, using delay units from MXR, TC Electronic, and so on. The Strymon DIG is a great all-around digital delay pedal. When combined with the Dawner Prince Boonar, they cover the entire Pink Floyd discography.

I also use the reverb side of the Strymon Flint to reproduce the plate reverb on Dark Side of the Moon. Or I use the hall setting to simulate a big venue like on Pulse.

To be a completist, a few other effects would be necessary. A DigiTech Whammy was used for certain songs on The Division Bell. A talk box was used for “Keep Talking” on The Division Bell, and for solos in “Pigs (Three Different Ones)” on the Animals album. I didn’t have room on this Fender Medium Pedalboard, so put those to the side or get a larger board if you really want them! 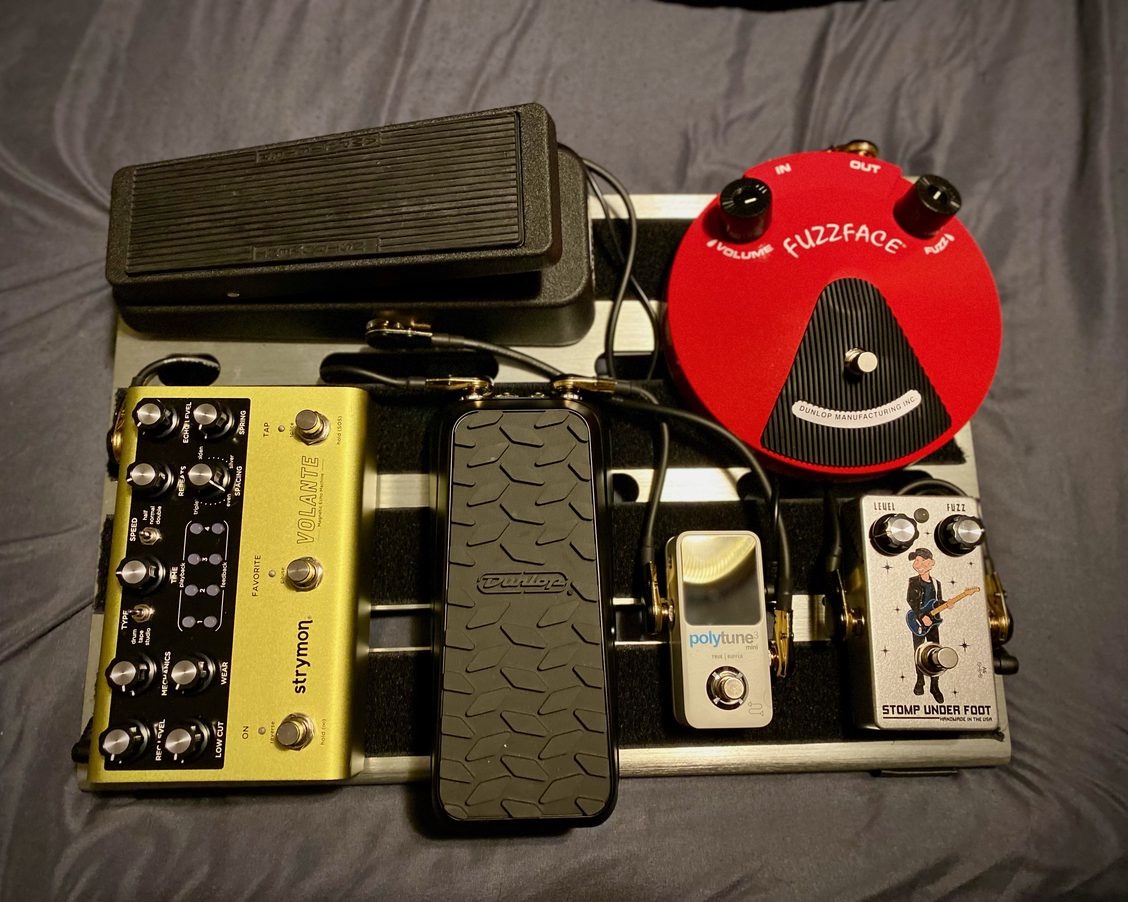 I have a germanium Dunlop Fuzz Face before it too, for darker sounds. Gilmour would even use these more as overdrives than outright fuzzes sometimes during this period.

I have a wah on the board just for the seagull sound in “Echoes.” It isn’t used like a normal wah, to say the least. You go into the output of the wah, keep it heel down, go to the 2nd position on a Strat with the volume up, and then slowly roll the tone up from zero.

Check out our TikTok to hear/experience this!

Gilmour used a Binson Echorec all over this period. The Strymon Volante is an amazing delay pedal in the Echorec style, with added features like tap tempo and spring reverb.

Great for volume swells found in “Echoes” or for controlling the amount of gain in a fuzz. I prefer to use a pedal for the swells and my guitar’s volume knob to clean up a Fuzz Face.

*An amazing resource for David Gilmour tones is gilmourish.com. I have spent many hours on this site!