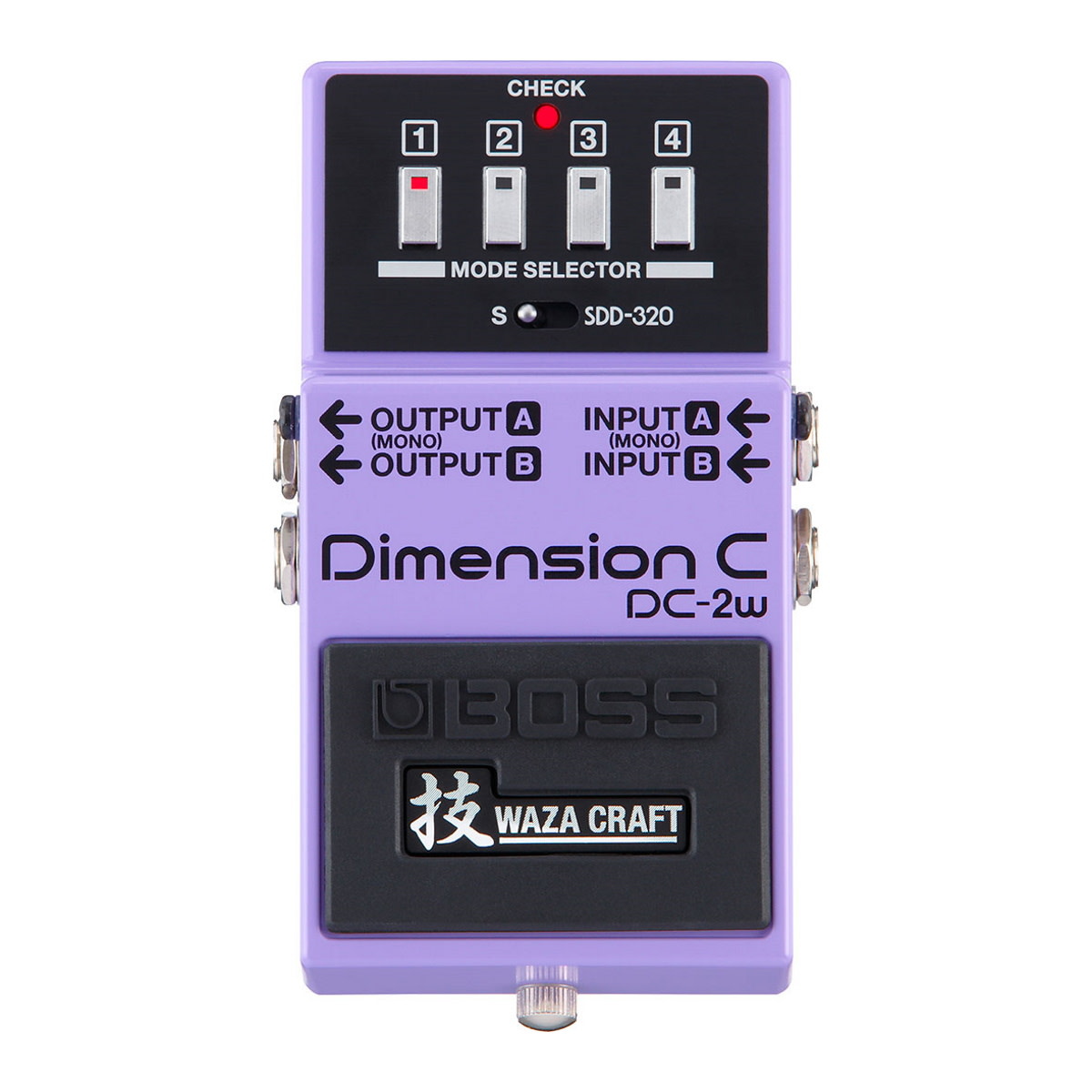 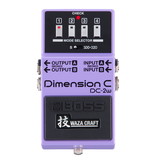 DIMENSION SQUARED
The genuine BOSS and Roland Dimension effect is back, and it’s now more versatile than ever! Designed in the premium Waza Craft analog tradition, the DC-2W offers not just a perfect sonic recreation of the original DC-2 Dimension C pedal, but also the legendary SDD-320 Dimension D studio rack effect it was based on. The DC-2W features the same intuitive four-button preset interface as the original ‘80s-era effects, now evolved with electronic switching that unlocks a multitude of sonic variations not available on the vintage units.

Highly sought-after by musicians and audio engineers, the Dimension’s unique spatial processing magically enhances the width and depth of any sound, from electric and acoustic guitars to keyboards, vocals, and other sources. Built from the original circuit designs and updated with modern refinements, the DC-2W is the only pedal available that delivers the classic Dimension experience with complete sonic authenticity.

Enhance Your Sound with Natural Width and Depth
The vintage Dimension effect is famous for its innovative 3D spatial processing that just makes everything sound a little better. It’s often mistakenly called a chorus effect, but it’s actually not. Though time-based like a chorus, the Dimension’s circuit is quite unique and sophisticated, subtly enhancing the width and depth of the source audio without any prominent modulated movement. The resulting sound is more open and natural, gently enriching any instrument or mix without making it sound overly processed.

Four Switches, Expanded Sonic Possibilities
Just like the original Dimension effects, the DC-2W offers a simple and direct interface with four preset switches that provide sonic variations with increasing width and depth. While the originals had mechanical switches, the DC-2W is equipped with modern electronic switches and status LEDs for more solid performance. The new switches also allow you to press two at once to access a variety of additional sounds. Across the DC-2W’s two effect modes (S and SDD-320), 20 different Dimension variations are possible with just four switches.

Authentic Tones with Modern Refinements
In the Waza Craft tradition, the DC-2W delivers vintage analog tones with modern design refinements for enhanced performance and versatility. Along with the new electronic mode switches, the pedal features a newly designed internal bypass circuit that greatly improves on that found in the original DC-2. In addition, versatile I/O enables the pedal to blend in with any mono or stereo rig, from regular guitar setups to audio interfaces and studio mixing consoles. And like all Waza Craft pedal models, the DC-2W includes a premium buffer circuit for ultra-transparent tone when the pedal is switched off.

The Roland SDD-320 Dimension D: A Studio Legend
Very quickly after its debut in 1979, the Roland SDD-320 Dimension D became a go-to secret weapon for audio engineers and music producers around the world. It can be heard on countless classic records in all genres, and is still regularly used today. From guitars, electric pianos, and synths to strings, backing vocals, and more, the Dimension D injects instant spatial mojo and sonic glue without creating an obvious “effect” sound.

The DC-2W’s SDD-320 mode fully captures the original Dimension D vibe in every way. Many engineers like to press multiple buttons on the Dimension D rack for new and different sounds. But in truth, only two actual sound variations are technically possible with this undocumented feature. With its modern switching, the DC-2W’s SDD-320 mode enables six sound variations when two buttons are pressed, including four “in-between” sounds and two all-new voices.

The BOSS DC-2 Dimension C: 3D Sound in a Compact Pedal
Introduced in 1985, the DC-2 Dimension C pedal brought the Dimension D’s distinctive spatial effect to the BOSS compact pedal format. While the Dimension D was designed as a studio effect that supported either mono or stereo input sources, the DC-2 was specifically created for mono sources like guitar, and features a modified circuit that produces a Dimension effect with a slightly different tonal flavor.

When S (Standard) mode is selected, the DC-2W delivers the exact sound of the original DC-2 pedal. Despite players trying, pressing multiple buttons on the DC-2 didn’t actually produce any sound variations. Similar to SDD-320 mode, pressing two buttons at once in the DC-2W’s S mode provides access to six different “in-between” sounds not available on the original DC-2.

Waza Craft: The Art of Superior Tone
Since the beginning, the engineers at BOSS have been committed to achieving the finest guitar tones using any technology necessary, from old-school analog circuits to high-tech DSP. This enthusiastic spirit continues on with the Waza Craft series, which brings you exceptional tone and touch response through carefully selected analog components, refined circuitry, and meticulous attention to detail. In Japan, “Waza” is the term for art and technique, and these special edition pedals proudly carry the Waza symbol to represent the pinnacle of BOSS design and craftsmanship.