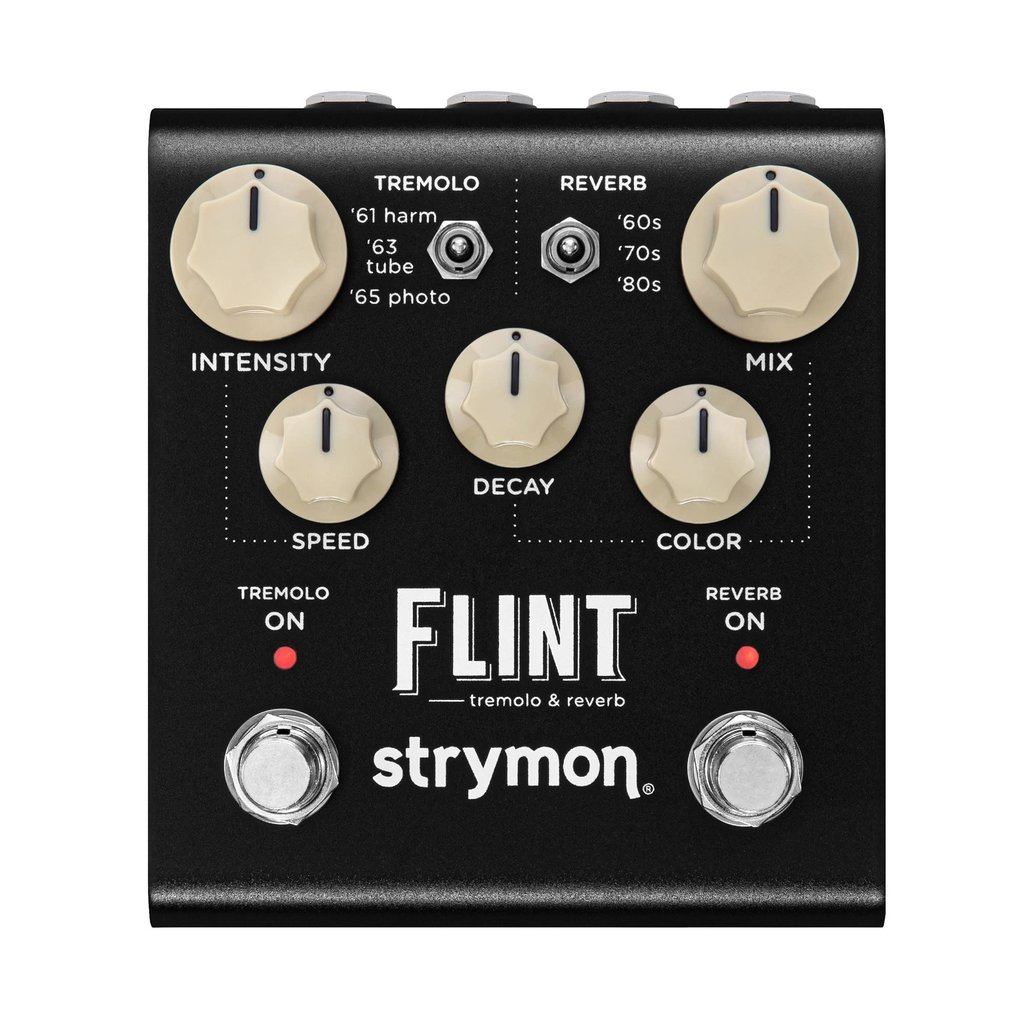 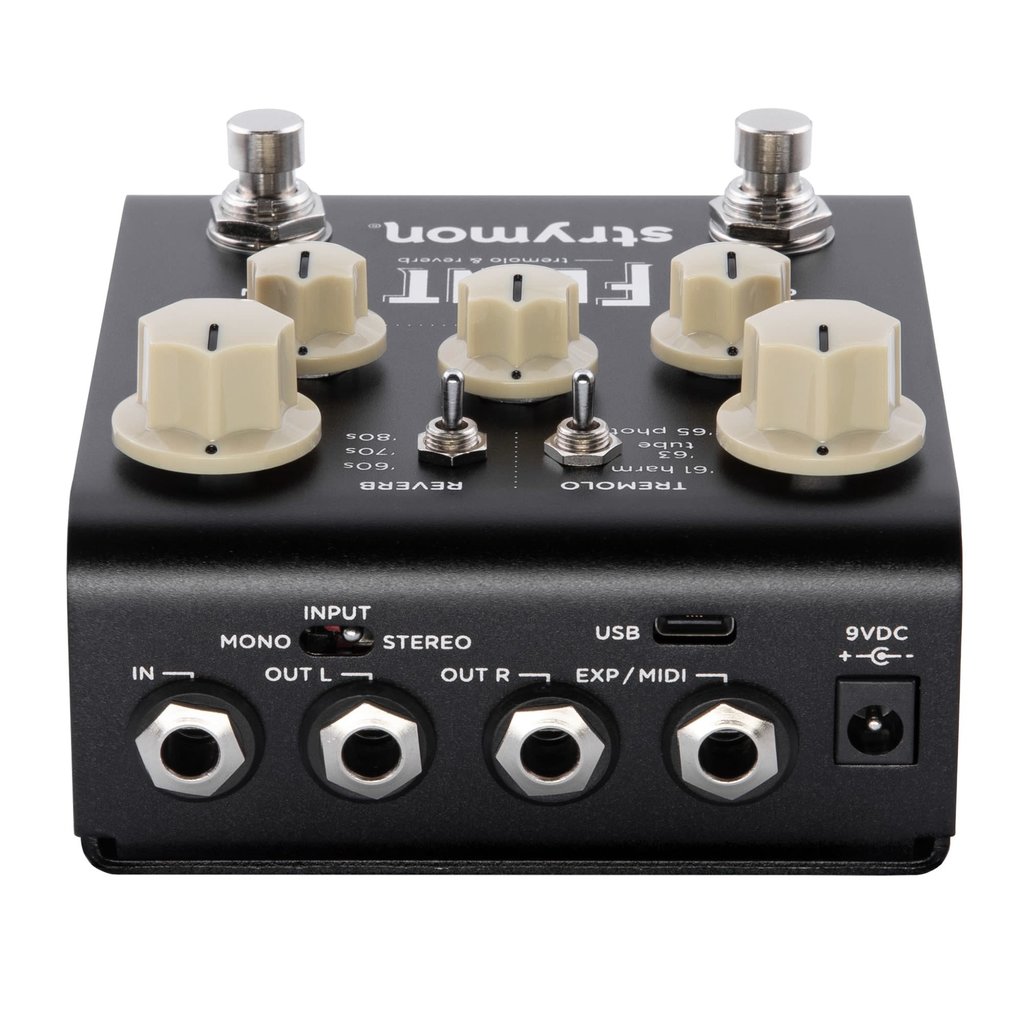 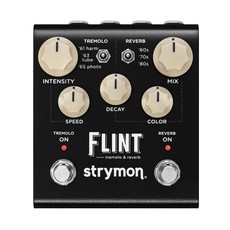 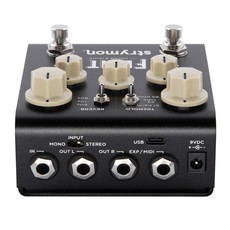 A Perfect Gentleman.
The magical combination of tremolo and reverb is the earliest example of a perfect guitar effects marriage. First pioneered within historic amplifiers of the 1960s, this harmonious coexistence has made its way onto countless records and performances — from early surf, swampy bayou blues, spaghetti westerns and film noir soundtracks, to modern day indie rock. As music moves forward, guitarists continue rediscovering the inspiration provided by this perfect pair.

Flint is a studio-class effects pedal that delivers this classic combination. We carefully studied our favorite classic tremolo and reverb circuits, examined the sonic complexities and faithfully accounted for every detail in our hand-crafted algorithms. Flint is essentially two pedals in one, with tremolo on one half and reverb on the other.

On the tremolo side of the pedal you can choose between the sonically complex ’61 Harmonic Tremolo, the swampy and sultry ’63 Power Tube Tremolo, and the sharp and balanced ’65 Photocell Tremolo. On the reverb side you can select the classic ’60s Spring Tank Reverb, the inventive ’70s Electronic Plate Reverb, or the nostalgic ’80s Hall Rack Reverb.

With nine parameters to tweak, you get extensive control over the tremolo and reverb characteristics. Go from splashy, pulsing twang, to throbbing, swampy blues, all the way to ambient, trembling, and serene reverberated pads.

Couple that with true bypass, and a premium quality analog front end and output section, and you have the history of tremolo and reverb in a pedalboard friendly format.

Vintage Sound, New Features.
Our second generation Flint gives you the same gorgeous tremolo and reverb sounds from our original and adds significant new features, incorporating technological advancements, hardware improvements and design enhancements to give you additional flexibility, power, and ease of use on stage and in the studio.

MIDI
Full MIDI implementation means you can control just about every switch, knob, and setting remotely by sending MIDI commands from your controller or DAW via Flint’s EXP/MIDI jack or USB-C connection. Tremolo speed can be synchronized via MIDI Clock Sync, and the sync setting can be saved for each preset.
300 MIDI preset locations are available for loading and saving your favorite settings.

Hardware Improvements
A premium analog JFET input circuit ensures superb responsiveness to your playing, and you can select mono or stereo input with the flick of a rear panel switch. All this, plus a new ARM DSP chip provides more processing power for every sonic nuance, with less energy consumption on your pedalboard.

Extended Control
Love slow tremolo? The Speed knob range has been expanded to slow the tremolo down to nearly 1Hz at its minimum setting. On the reverb side, pre-delay time is now adjustable.

'61 Harmonic Tremolo - A Unique Rarity.
The ’61 Harmonic Tremolo is somewhat rare due to its very short period of availability in tube amplifiers in the early 1960s. It gets its signature sound through a dual-band filtering effect that alternately emphasizes low and high frequencies. The end result is a soothing pulse that has shades of a mild phaser effect combined with tremolo, due to the nature of the frequency bands that are alternated.

The ’63 Power Tube Tremolo utilized the LFO signal to directly influence the power tube bias of the amplifier’s push-pull output stage. The power tubes are biased into lower and higher idle currents, creating the fluctuating gain that produces the tremolo effect. The effects of crossover distortion at low tremolo volumes, increased power tube harmonic distortion at maximum tremolo volumes, as well as the influence of power-supply sag, all add up to the boggy and dirty nature of this tremolo circuit.

'65 Photocell Tremolo - Get To The Chopper.

The ’65 Photocell Tremolo is a faithful recreation of the classic photo-trem circuits found in mid-1960s American amplifiers. Those classic circuits used a light-dependent resistor (LDR) to attenuate the input signal, coupled with a miniature neon bulb that is connected to the LFO. As the LFO oscillates, the bulb gets brighter and dimmer which in turn varies the resistance of the LDR. The varying resistance works with other circuit impedances to change the signal level, which produces a characteristically “hard” sounding tremolo that moves between two levels, reminiscent of a square wave.

The ’60s Spring Tank Reverb is our faithful recreation of the full-size two-spring tank that was commonly used in vintage amps. The two-spring tank uses spring segments of differing delay times, which adds to the complexity of the reverberated sound.  Contributing greatly to the sound are the input and output tube circuits which convert the electrical guitar signal into a mechanical signal and then back to an electrical signal.

The ’70s Electronic Plate Reverb pays homage to one of the earliest digital reverbs ever created. The astounding hardware-based algorithm used multiple delay-lines configured in parallel, with each delay featuring multiple output taps and filtered feedback paths. The result is a rich, smooth reverb with a very quick build-up in density due to the summation of the many parallel output taps.

The ’80s Hall Rack Reverb is our rendition of the now-nostalgic digital microprocessor rack reverbs from the late ’80s. The limited processing power of the day led to the implementation of efficient regenerative series loops of all-pass filters, delays, and low-pass filters. Modulating delay lines were used to increase the reverb density and add warmth. This reverb provides the signature sound of distinctive early reflections followed by the slowly-building density of the late reverberation.

Want to run your reverb intro tremolo like your favorite vintage tube amps did? Or do you prefer modulation before reverb for a cleaner, modern tone? Flint gives you options for both with an Effect Order secondary function that lets you choose exactly how you want your reverb and tremolo routed for ultimate tonal control. This setting is accessible as a Live Edit secondary function and is savable per-preset.

Pre-Delay controls the delay time before the reverberated signal appears, and is now accessible as a Live Edit secondary function, savable per-preset.